“State Protection” is the name of  a painting that was purchased in 2018. A year ago, I had it reproduced as a giclee print (edition of 100) in the same 12″ x 12″ format. This month, a reproduction was purchased by a client in the United Kingdom who wanted me to write a statement about it. And since today is July 4th and we celebrate our “united states” and its Independance Day, we remember that the state receives its true “protection” from God.

The painting began in a workshop where I was demonstrating the addition of text and images in order to explore themes or motifs in creating a work of art. My artist’s statement ( www.gracecarolbomer.com ) explains why I incorporate words and images into my work with the hope to unite the visible and the invisible world and intimate the possibility that these two realms can be brought together! The Incarnation is evidence of that. The God-man, Jesus, became visible, image/flesh. He came from the invisible realm to unite Spirit and flesh. He is also called The Word of God, so all language has meaning in him (John 1), but that is a subject for another post.

Words and images are ubiquitous. The Wall Street Journal is my go-to newspaper for current news and cultural events. The Syrian refugee crisis was happening, and this image of two two Syrian boys struck me as mysterious and very sad. Without the news story, they might have been innocent American Boy Scouts. Were they without parents and being taken by the state. Or were they perhaps being trafficked for even more sinister purposes.

The boys are huddled under a dark tower. The Tower of Babel  has been the motif in my critique of post-post modernism, where the world is a text and truth is relative. Babel is the symbol of man’s claim of rule and power and religious truth apart from God and his authoritative Word. The name State Protection was the text under the photo. You can see the word “state” under the boy’s leg. The idea of protection by the state is ironically sad. The boys are huddled inside Babel, which will ultimately not protect them.

Above this dark tower are foreboding clouds and flashes of lightning. The wide-eyed boys wait. Is the counterfeit god of “State Protection” a match for the God of the universe who is “coming on the clouds”? Clouds and thick darkness are all around him; righteousness and justice are the foundation of his throne. Fire goes before him and burns up his adversaries all around. His lightnings light up the world; the earth sees and trembles . . . (Psalm 97:2-4).

The dark clouds above the tower are clouds of judgment on Babel — the spiritual powers of darkness who seek freedom from God’s laws. Government, instituted by God, has a God-given duty to protect its people and punish the wrongdoer. It is a minister of God to you for good. But if you do what is evil, be afraid; for it does not bear the sword for nothing; for it is a minister of God, an avenger who brings wrath on the one who practices evil (Romans 13:4). But governments who do not obey God’s laws and who usurp the God-given spheres of family and the church (religion) will not go unpunished.

The good news in spite of  evil and lawless governments is that the antithetical war between good and evil (Christ and Satan) has already been won. God foretold this to Adam and Eve. I will put enmity between you (Satan) and the woman, and between her Seed (Jesus Christ) and your seed, you will bruise his heel, but he will bruise your head (Genesis 3:15). The scandalous and paradoxical death of God’s son on a cross defeated Satan’s dominion of death and destruction and lawlessness. “Every knee shall bow” at the name of Jesus on the coming “Day of Clouds,” when the Righteous Judge will judge the world in righteousness.

The evil and lawlessness rampant in the world does not take God by surprise. Before the world was created, He fore-ordained a people (his bride) for himself out of many peoples and tongues, but he also fore-ordained a people (Babylon the harlot) who would receive the penalty of death. The LORD has made everything for its purpose, even the wicked for the day of trouble (Proverbs 16:4).

In order to show the riches of his glory to vessels of mercy, which he has prepared beforehand for his glory, he endures with much patience vessels of wrath prepared for destruction (Romans 9:22-24).

He has taken captive, his captives

“Judgment of Babylon” (below) is about impending judgment.  A plumbline, a builder’s tool to make things straight and right, hangs above a fading Tower of Babel standing above a neglected building project of million-dollar homes.

In Revelation, John writes to the last of the seven churches. The faithful and true witness, the beginning of God’s creation warns the church to buy salve to anoint their blind eyes so they can see (Rev. 3:15-18). A detail of my painting below reflects this warning and call to come.

IF ANYONE HAS EYES LET HIM SEE

Jesus repeats his eternal plan in the last chapter of Revelation. It reveals his eternal immutability and character.“Let the evildoer still do evil, and the filthy still be filthy, and the righteous still do right, and the holy still be holy. Behold, I am coming soon, bringing my recompense with me, to repay each one for what he as done. I am the Alpha and the Omega, the first and the last, the beginning and the end (Revelation 22:11-13).

If Anyone Has Eyes, Let Him See is a title also used by Cuban-Spanish artist Gustavo Díaz Sosa. His Tower of Babel themes attempt to understand the individual’s relationship to the powers of the state and those who rule. Man without God is small, a small cog in a big wheel. He writes: Most of us, blinded by the comparison between equals, competition, ambition, cravings for power and possession; trying to elevate ourselves and touch some form of His Glory by dealing in clichés and hiding in agglomerations, ceasing to be authentic and to take part in new stratagems. But not all know (nor want to), see or understand how regrettable the situation is. This is why, as a simile of the warnings of Saint John in his Revelation, I convene the public to find the truth, but to do it, they must take away the bandage that blinds them and know how to use their authentic eyes . . . If anyone has ears, let him hear! If anyone has eyes, let him see! 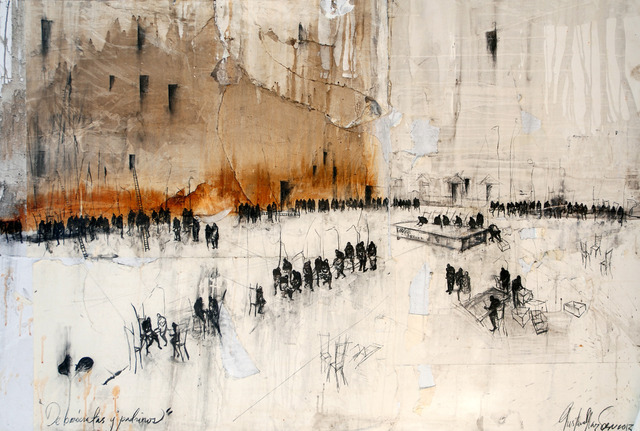 If Anyone Has Eyes to See, Let him See

The name of the LORD is a strong tower, the righteous man runs into it and is safe (Proverbs 18:10).